Professional ironwoman and USC Education student Jordan Mercer has claimed a national title that she didn’t even know she was in the running to win.

While competing at the recent DHL International Surf Rescue Challenge in New Zealand, Mercer was advised by coaching staff that she had been named the recipient of Australian University Sport’s (AUS) Most Outstanding Sporting Achievement of the Year award.

This was in honour of her achievements throughout 2017 that included winning three gold medals at the 2017 World SUP and Paddleboard Championships in Denmark.

The Bachelor of Primary Education student last month received USC’s Sportsperson of the Year trophy and, as a matter of course, was nominated for the national awards. Her success at this level makes her the first USC student to claim the AUS’s top gong.

“I couldn’t believe that,” Mercer said. “One of our team managers (USC staff member and former world champion ironwoman Kristy Ellis) let me know when we were in New Zealand.

“It’s all new to me. This is my first year at university and I didn’t realise they had awards like this. It’s a beautiful surprise.”

This program enables elite athletes to pursue their sporting and academic goals at the same time.

“It all went really well ­­-- I really enjoyed it,” she said. “I’m looking forward to getting back into that routine of study.

“There’s been a healthy balance for me this year with my training, racing and coaching as well. Study has been a challenge, but a welcome challenge.

Mercer is gearing up to compete in the third round of the Nutri-Grain Ironwoman Series at Wollongong this weekend ahead of an Ocean6 Summer of Surf series event later this month. 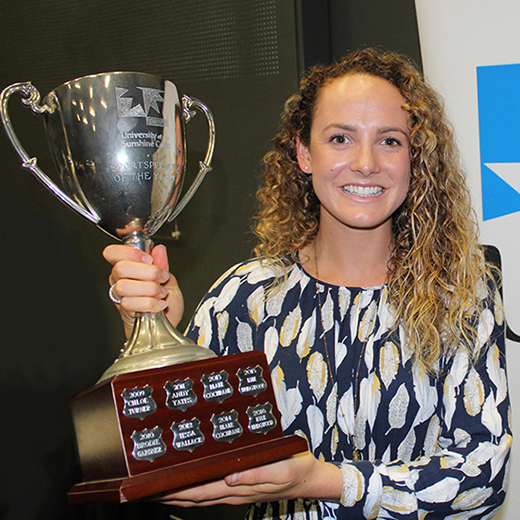