Big year for USC in 2017 - University of the Sunshine Coast, Queensland, Australia

The University of the Sunshine Coast turned 21 this year and its ‘coming of age’ featured many achievements, including significant milestones in its growth and development, its research capacity and its reputation.

The University’s objectives of a sporting nature – specifically to become a centre for high-performance sport and a place for top-level athletes to pursue their sporting and academic goals – had obvious outcomes.

USC launched its High Performance Student Athlete program in February to encourage the ‘dual career education’ of elite athletes. Among those who signed up for the program was champion paddleboarder Jordan Mercer, who began a degree in Education. Mercer’s successes in 2017 – including three gold medals at the World SUP and Paddleboard Championships in Denmark – saw her become USC’s first student to win Australian University Sport’s Most Outstanding Sporting Achievement of the Year award.

In February, USC completed a $5million overhaul of its stadium to provide a ‘cauldron-style’ home court for the Sunshine Coast Lightning netball team, which is co-owned by USC and the Melbourne Storm. This team, which has two players studying at USC and receives sport science support from the University, scored a resounding 65-48 victory over Sydney-based Giants in the inaugural Suncorp Super Netball grand final on Saturday 17 June in Brisbane.

The USC Spartans swimming squad made its presence felt this year, finishing second on points at the Australian titles in April, then going one better at the Australian Short Course Swimming Championships in Adelaide in July to claim the prestigious JF Howson Premier Club award. As well as winning a swag of medals, six Spartans were selected for 2017 world championship events. The World Para Swimming Championships in Mexico were cancelled due to an earthquake, but three Spartans (Leah Neale and Taylor and Kaylee McKeown) competed at the FINA World Championships in Hungary, each returning with a medal.

In December, USC became the home base for the Australian Cycling Academy, founded by former national champions Matt Wilson and Ben Kersten with support from Sunshine Coast Council and USC. The academy aims to provide a better future for talented young Australian cyclists, and has already recruited several cyclists who are medal prospects at the Gold Coast Commonwealth Games. They will be in good company at USC during early 2018 with several Commonwealth Games teams, most notably Wales and Scotland, basing themselves at the University in the lead-up to the Games.

More than 200 USC students competed in the Australian University Games on the Gold Coast in September. They achieved USC’s best ever result, picking up five medals and finishing sixth on the per capita rankings. Among the medal winners were siblings Martin and Vicky Clark who won gold in the decathlon and silver in the heptathlon respectively.

A concessional loan of more than $100million was announced in the Federal Budget in May to assist in the construction of USC’s Moreton Bay campus at Petrie. By December, USC had appointed Hassell Studio to design the master plan and the first building of this campus. Construction of the three-storey foundation building is to begin in mid-2018. In June, the governing councils of QUT and USC agreed to transfer QUT’s Caboolture campus to USC, with the official handover planned for January 2018.

USC announced in October that it will offer a Bachelor of Medical Science for the first time in Semester 1, 2018. This three-year undergraduate degree will provide provisional direct entry into Griffith University’s planned Doctor of Medicine program that is expected to begin at the SCUH in 2019.

In other medical-related news, USC’s Sunshine Coast Mind & Neuroscience – Thompson Institute at Birtinya gained $5million in funding from the Federal Budget. And USC’s Clinical Trials Centre got into full swing this year, launching trials with key partners for new and investigational medicines for cancer, asthma and bowel disease and to assess new detection devices for diseases like streptococcus and influenza.

USC had plenty to celebrate in 2017, including the appointment in April of Air Chief Marshal Sir Angus Houston AK, AFC (Ret’d) as the University’s new Chancellor and the appointment in May of business leader Scott Williams AM as Deputy Chancellor. The Governor of Queensland, Paul de Jersey AC, installed Sir Angus as Chancellor at a formal investiture ceremony in August.

In September, USC presented its annual Outstanding Alumnus award to Nursing Science graduate Captain Jan Becker of Yandina Creek for her work in running the largest helicopter flight academy in the Southern Hemisphere, Becker Helicopters Group, and for regularly assisting Tanzanian midwives to save the lives of newborn babies.

USC’s Sustainability Research Centre turned 10 in October and celebrated the achievements of its academics, research students, graduates and partners. Two months later, USC’s Innovation Centre marked its 15th anniversary with a networking lunch. Since 2002, the centre has supported the startup and growth of more than 200 businesses, creating more than 840 jobs, raising $34million in investment for client companies, and contributing more than $60million to the regional economy.

On the cultural front, USC Art Gallery’s schedule of exhibitions included the impressive ‘East Coast Encounter’ in February with a forum led by Sixty Minutes reporter Jeff McMullen, and ‘From the mountains to the sea: Sunshine Coast stories’ in July that celebrated the 50th anniversary of the naming of the Sunshine Coast.

In late August, USC and Insite Arts presented Architects of Air’s Arboria luminarium – a monumental pneumatic walk-in sculpture designed to generate a sense of wonder at the beauty of light and colour. Almost 10,000 people viewed this exhibition, which was USC’s contribution to the Sunshine Coast Council’s Horizon Festival of Arts and Culture.

There were many research highlights throughout 2017, including the Australian Research Council awarding $1.7million in November to five research projects led by USC. These projects range from finding new ways to prevent industrial accidents to better understanding genetic diseases among Aborigines and investigating the safety of advanced automated vehicles.

In March, the work of Professor Christian Jones was showcased when Bruce and Denise Morcombe launched an app version of an online game that helps children avoid sexual abuse. And in October, the cybersecurity work of Professor David Lacey featured as part of National Stay Smart Online Week and in an ABC TV documentary series ‘Keeping Australia Safe’.

In April, USC featured for the first time in the Times Higher Education Young University Rankings. It placed in the 101-150 category out of the top 200 universities under 50 years old, edging it closer to its strategic goal of being among the world’s top 100 young universities by 2020. 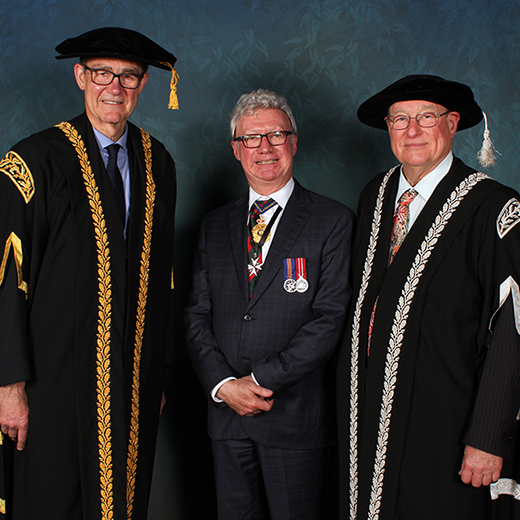