USC has appointed architecture firm Hassell Studio to design the master plan and the first building of the University’s Moreton Bay campus at Petrie.

The three-storey foundation building, to be built on land adjacent Gympie Road near the Petrie railway station, will sit at the western end of an extended open mall that will form the spine of the campus and stretch out to a village green and a library.

The building will have floor space exceeding 16,000 square metres and feature an impressive 480-seat capacity internal amphitheatre that will provide relaxed study areas for students as well as a venue for community events.

Construction of the building is to begin in mid-2018 and be completed in time for the university campus to open in Semester 1, 2020.

Hassell Studio principal Mark Roehrs said it was exciting to design a structure that could cater for rapid growth in student numbers during its first few years as well as set the tone for the rest of the campus.

“The foundation building will be constructed with a clear overall understanding of what the campus will look like in the longer term,” Mr Roehrs said.

“We’re making it a building that will support a rich learning experience, with a commitment to interactive spaces for peer-to-peer learning. There will be many teaching spaces but also loads of space for students studying outside the formal classroom timetable.”

Mr Roehrs said large, versatile lab spaces with advanced audio-visual technology would be included to accommodate multiple classes being taught within any one area.

“It will be a flexible environment that can change from having 1,000 students in the first year to 3,000 students in the third year,” he said. “During the life of the building, its use is going to change significantly and its configurations will change accordingly over time.

“This factor has dramatically affected the layout of spaces – so instead of desks in rows or traditional settings for lectures, we’ll have collaborative lecture theatres to allow for the didactic mode of teaching as well as collaboration.”

Other key features of the campus will be solar panels to deliver more than half the campus’s electricity needs, and easy access to public transport through direct rail links to Brisbane, Redcliffe and the Sunshine Coast.

Discussions are also underway for the development of a new secondary school on the campus, to support Moreton Bay’s rapidly expanding population.

USC Vice-Chancellor Professor Greg Hill said continued cooperation between all levels of government and the University would soon see the region hosting one of Australia’s most innovative and integrated learning environments.

“We share a vision and ambition for education in Moreton Bay which will see this community finally able to access the opportunities it deserves,” he said.

“It’s genuinely exciting to see plans turning into reality, and I look forward to watching the campus take shape in the years ahead.”

Hassell Studio has already built several buildings on USC’s main campus on the Sunshine Coast and the foundation building for USC Gympie.

The university campus at Petrie will be the centrepiece of Moreton Bay Regional Council’s Mill at Moreton Bay development. 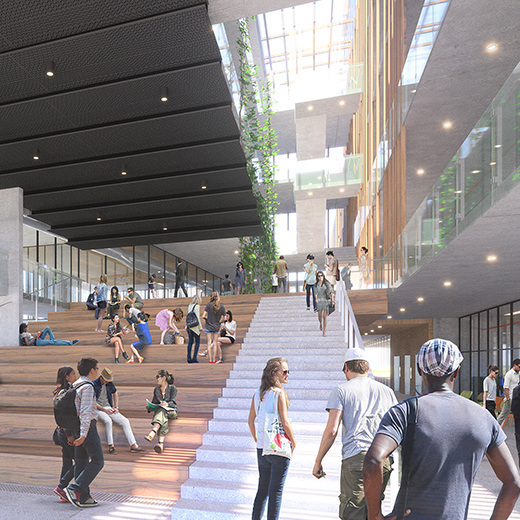