A retired Melbourne couple returned home from a four-year Sunshine Coast adventure with more than warm holiday memories – they both now have doctorates.

David and Susie Utting, aged 71 and 69 respectively, decided the time was right in 2012 to enrol at the University of the Sunshine Coast, after they moved to Kawana Island to be closer to their daughter on the Coast.

With Master studies at the University of Queensland under their belts, the husband and wife duo wanted to pursue their interests through further education and research at USC.

David, a former industrial relations manager in the Victorian electricity industry, was intrigued by the connections between Australia’s national summer sport – cricket – and the development of an Australian national identity.

David said they were now celebrating their doctorates in the chill of the Mornington Peninsula, having moved back home to Victoria for family reasons this year.

“I took a bit longer than Susie to get my PhD and she keeps reminding me of my tardiness in completing my research,” said David, whose degree will be conferred at USC’s Graduation Ceremonies on 29 September, while he is travelling overseas.

“We had a wonderful time at USC and on the Sunshine Coast and are missing both already.”

Susie, whose DCA (Doctor of Creative Arts) was conferred in 2015, said she was fortunate to have had Professor Gary Crew as her main supervisor as she researched and wrote about the history of a mining town in the Latrobe Valley.

Her creative artefact portrayed the demise of Yallourn, where the couple once lived. A collection of poems from the artefact titled Coal Dust on Roses was published by Ginninderra Press.

“The USC campus was so friendly and welcoming for mature-age students,” Susie said. “I enjoyed the Research community lecture series and the peer support.”

“It was really interesting research and I enjoyed interviewing migrant cricketers from Sri Lanka, India, the Pacific Islands, Afghanistan and Pakistan, to learn about their experiences,” David said. 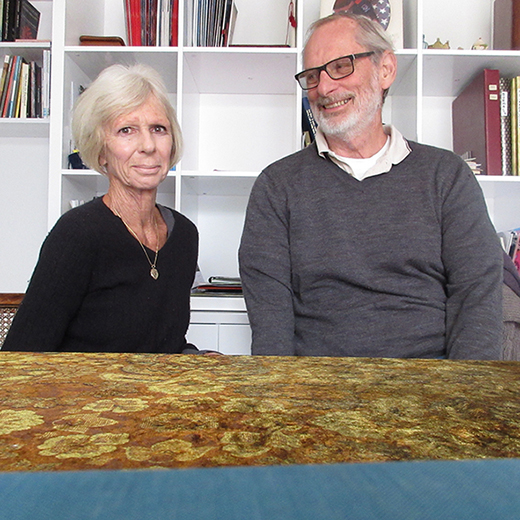