Outstanding alumni to be awarded - University of the Sunshine Coast, Queensland, Australia

Outstanding alumni to be awarded

A 37-year-old Arts/Business graduate who is now an executive director at a leading Abu Dhabi property services company will be named the University of the Sunshine Coast’s 2016 Outstanding Alumnus of the Year at a ceremony on Tuesday 13 September.

2003 USC graduate Ryan Darnell is responsible for 4,000 Facilities Management staff and 80 percent of revenue at Khidmah, a company with a diverse property list including residential, commercial, retail, government infrastructure and more than 300 mosques.

The third-generation Sunshine Coast local who started his double degree at USC in 1997, a year after it opened, said he was humbled by the award. “Studying at USC gave me a broad range of experiences and skills that I have used every day in my career,” he said.

Mr Darnell said he particularly appreciated the multicultural exposure during his USC studies, and the “amazing level of access to professors who were leaders in their industries”.

“I was inspired by lecturers to venture into courses I may not have chosen previously and I still keep many of the textbooks on my office shelf in Abu Dhabi,” he said.

“The study was intense, but I was able to learn with students from a variety of backgrounds while also visiting the beach in the mornings and having the familiarity of my hometown.

“Australia’s greatest export is not found in the ground but in the minds of those who come from our world-class universities, and I believe USC creates many of those minds. My clients and colleagues study in the US or the UK and I’m proud to tell them about my University.”

Handpicked for her current role after working as a field reporter across the Wide Bay and Sunshine Coast newsrooms, Ms Toney said USC nurtured her ambition to be an innovator in news delivery formats.

“I’m now responsible for pushing the news agenda for 7 News to our regional markets via social media, including writing, producing and presenting the 8pm online bulletins,” said the 31-year-old who is passionate about giving a voice to regional communities.

2006 graduate Scott Barker said his USC Bachelor of Science (Sport and Exercise Science) had kicked off his career to the highest levels in rugby league, from touring internationally with teams to his current role as Head of Performance Analysis at the Brisbane Broncos.

Mr Barker, who was appointed to the Broncos by coaching legend Wayne Bennett, said he was surprised and humbled by the USC recognition for his innovative work as he pushed the boundaries of sports technology to improve team performance.

“The biggest single thing I got out of completing my degree at USC was confidence – not so much from the piece of paper but from the people teaching the degree who told me I was on the right track and to keep pursuing my dream,” said the 35-year-old, adding that Professor Brendan Burkett had been a big influence.

Alumni Relations Officer Anita Edmonds said the career success of the three recipients would inspire a crowd of fellow graduates, staff, students, donors and supporters of the University.

For further details on the winners go to www.usc.edu.au/alumniawards.

For details of the alumni awards ceremony call 5430 1104 or email alumni@usc.edu.au. 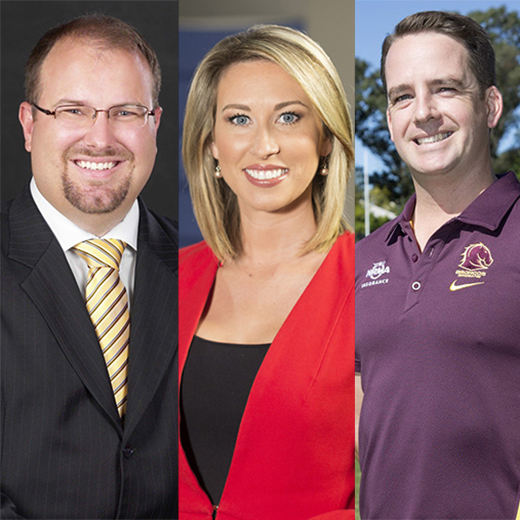