Call to use phones to help those with disabilities - University of the Sunshine Coast, Queensland, Australia

Call to use phones to help those with disabilities

A University of the Sunshine Coast academic recently hit the road to share her expertise in how smart phone technology can be used to improve the lives of people with disabilities.

Senior Lecturer in Occupational Therapy Dr Michele Verdonck called in to four University of the Third Age (U3A) groups between Coolum and Maleny last week to deliver a presentation on assistive technology.

Dr Verdonck showed U3A members how the cutting-edge equipment can transform the average smart phone or tablet into a device that significantly boosts independence.

She said that while most people usually only used smart phones to call friends or browse online, the phones could be harnessed to help those with physical or cognitive disabilities achieve everyday tasks around the home.

“Assistive technology is starting to meet mainstream technology in a way that’s quite revolutionary,” Dr Verdonck said. “Bluetooth allows us to set up a phone or tablet to operate a television, turn lights on, or even change the air-conditioning settings.

“People who would have difficulty using the traditional touchscreen can operate all this with the use of a simple one-button system.

“This technology gives people a greater sense of autonomy, which has been shown to have huge psychological benefits – imagine answering a phone for the first time in 20 years.”

Dr Verdonck, who undertook PhD research into assistive technology, said speaking to U3A groups was part of a much larger awareness-raising campaign.

“I’m trying to get more occupational therapists, as well as the wider public, to make the most of this technology,” she said. “Smart devices have developed really rapidly, and integrating eye-gaze technology is likely to be the new frontier in this field.

“Many people in the U3A groups felt they were quite technophobic, but they were really interested in the way that technology can make a huge difference in this area.” 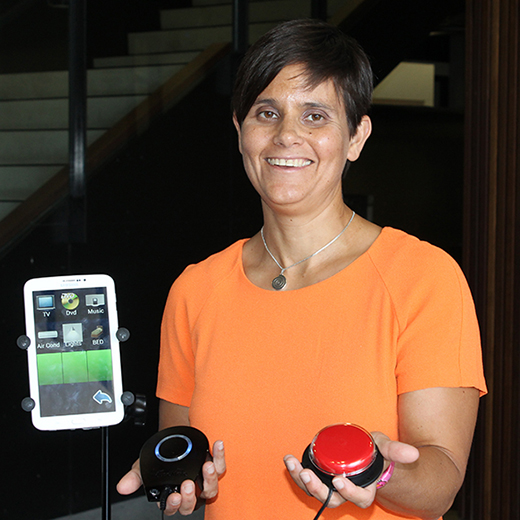