An award-winning researcher with a love for long-distance sporting events is the new Head of the School of Science and Engineering at the University of the Sunshine Coast.

Professor David Young has worked across Australia, the United Kingdom and Asia and was most recently Head of the School of Science at Monash University’s Malaysia campus.

Previously, he was Dean of the Graduate Studies and Research Office at Universiti Brunei Darussalam.

Professor Young said his role at USC was aimed at ensuring staff had the capacity to deliver the best possible teaching and learning outcomes for students, as well as facilitating world-class research within the Science and Engineering areas.

“University is about personal development, but it’s also about preparing students for the workforce,” he said. “We want to provide programs that students can get excited about, as well having strong employment outcomes for them when they finish.

“It’s important our staff undertake research that’s relevant to the Sunshine Coast and the broader community, and we have some real superstars in that respect.

“I want to make sure our academics have the capacity to continue that research and contribute even further to the region.”

Professor Young’s research focuses on new chemical materials and he has been awarded two national research medals by the Royal Australian Chemical Institute.

Two of his current projects are: making anti-microbial gels to stop the growth of bacteria on hospital equipment; and working to create molecules which could be used for hydrogen storage.

Outside the laboratory, Professor Young has completed five Ironman Triathlons, which involve a 3.8km swim, 180km of cycling and finishing with a 42.2km marathon-length run.

“I was living in Malaysia, which wasn’t the best area to train, so the Sunshine Coast has been a treat in that respect,” he said.

“I could perhaps have another marathon in me, but I think five Ironman triathlons is probably enough.” 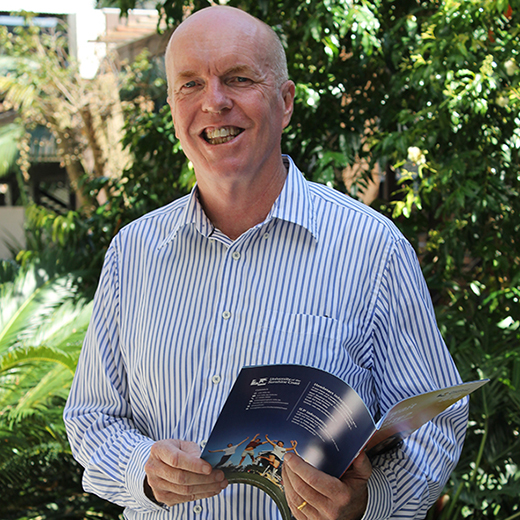