A high-performance swimming coach based at the University of the Sunshine Coast has become only the third woman in Australia to receive the sport’s highest coaching accolade.

The prestigious award recognises individuals who have coached athletes to medal-winning performances at the Olympics or World Championships, and who have displayed ongoing commitment and service to the sport at an international level.

Only 23 Platinum Coaching Licences have been issued nationwide.

“A Platinum Coaching Licence is a big honour, and I feel very privileged to have received it,” Ms Cameron said. “It’s a pleasure to be in the company of the other coaches across Australia who have been named over the years.”

An Olympic and Commonwealth Games representative, Ms Cameron attributed her coaching success to a “no-nonsense” style that encouraged independent athletes who were accountable for their own performances.

“A coach is there to help swimmers achieve their goals, and my role is to equip athletes with the skills they need to do that, and to encourage them to accept full responsibility for their swimming,” she said. “I consider myself a partner in their journey.”

“Jan’s approach to coaching aligns perfectly with our high performance sport culture, and the results of the athletes clearly show we are on the right path,” he said.

The eight swimmers in USC’s Paralympic squad are now focussed on delivering quality performances at the 2016 Rio Olympic trials in Adelaide next April.

Ms Cameron, who has already been named as part the 2016 Paralympic coaching staff, said she hoped the entire squad would be able to accompany her to Rio in August. 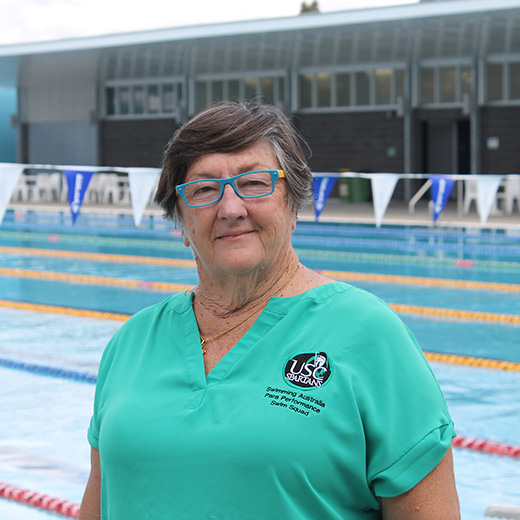